In Jenjarom, a small palm plantation town a few kilometres outside of Kuala Lumpur, Malaysia, the smell of burnt plastic crept across the town every night, entering the homes of residents, causing them to wake up choking for fresh air. After months of sleepless nights, a few local residents decided to investigate the source of the smell, forming the Kuala Langat Environmental Action Association (KLAA). They discovered that numerous illegal recycling facilities had mushroomed up in the area and were burning the plastic materials in the cover of the night and then dumping the waste directly into the rivers and on land, hidden in the dense palm plantations. Over 17,000 tons of trash were discovered to have been illegally processed and dumped in the town. A majority of the plastic materials found were from countries such as Japan, the UK, Australia, and the United States. Despite tremendous obstacles because of the lack of support from local authorities, after months of relentless documentation and reporting, the activists were able to bring the issue to light on a national scale with the help of local and international media. Most of the contaminated waste was eventually removed from the town, but much of it remains concealed below the surface and illegal factories are continuously popping up in Jenjarom and throughout peninsular Malaysia. Members of the KLAA are determined to keep their town free from the importation of plastic waste from other countries, but one question remains: If the waste isn’t here, then where is it? 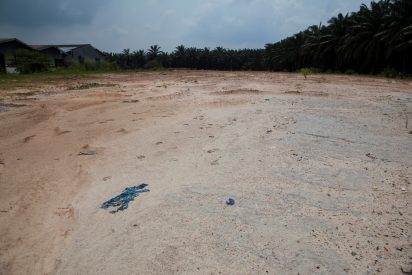 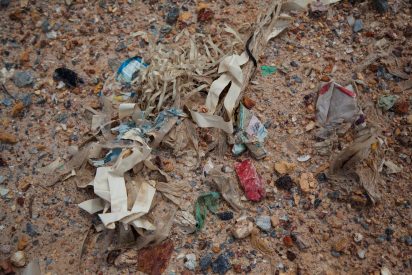 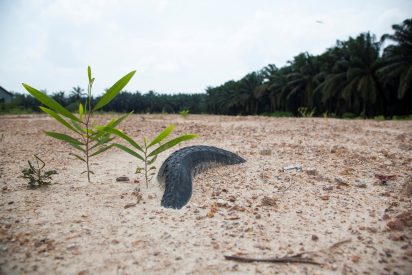 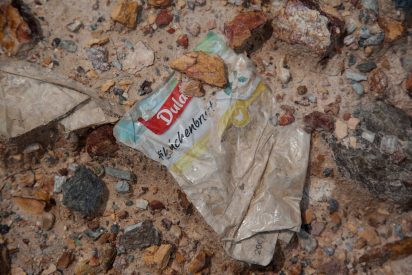 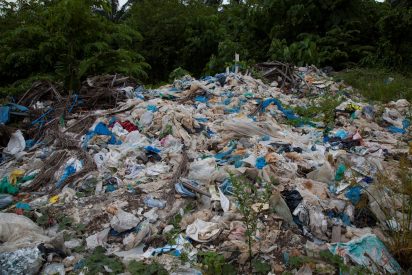 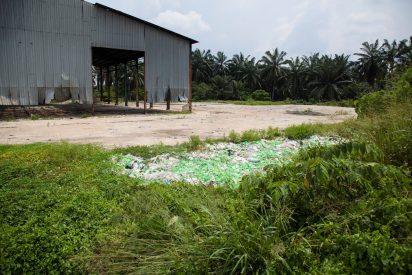 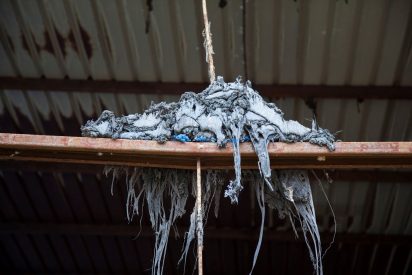 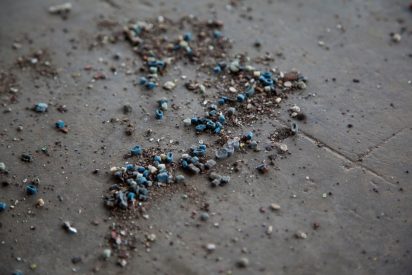 August 25, 2019. Kuala Langat, Malaysia. One of the largest illegal recycling facilities and dump sites had over 4,000 tons of waste piled up. This particular site was featured in local and international news stories, revealing dramatic images of people walking on mountains of trash. Some of the trash found included materials from the United States, Japan, Germany, and Spain. This site was considered a success story since most of the waste was removed, but much of the plastic was buried under a layer of sand that was brought in. When walking on the site you can feel the crunching of plastic beneath your feet. Burnt plastic, plastic pellets, and toxic waste water remain in the abandoned recycling facility. (Photo Credit: Marlena Skrobe)

Where does recycling go? This is not a question we dutiful recyclers usually ask ourselves once we have sorted and placed our waste materials into separate blue, green, and black bins. However, on the global scale, it is a question that is being raised, and one that individuals should start to consider. For years, the US and other wealthy countries have been selling their soda bottles, yogurt containers, old newspapers, Amazon boxes, and other recyclable materials to China. China had the capacity and cheap labor to sort our recyclable materials and a market to use the plastics for processing and manufacturing since the imported plastic waste was often a higher quality than what was available domestically at the time. In 2001, China became a member of the World Trade Organization, which allowed for China to export even more manufactured goods in massive shipping containers internationally. For wealthy nations, like the US, it was easy to fill the empty shipping containers with plastic materials for the trip back. However, much of this plastic material is often dirty because it’s mixed in with other rubbish. The processing of plastic also produces a significant amount of pollution, especially when done improperly. On December 31, 2017, China sent a clear message with regards to our recyclable waste by enacting the “National Sword” policy, which banned the importation of most wastepaper and plastics, mostly from developed countries. The 30 million tons of waste sent annually from all over the world to China would have to find somewhere else to go. By 2030, an estimated 111 million metric tons of plastic waste will be displaced by the new National Sword Policy if our waste production and infrastructure remains the same.

Since China restricted the importation of global waste, much of this waste has been redirected to Southeast Asian countries, such as Malaysia, Thailand, Indonesia, and Vietnam. Many of these countries lack the strict environmental regulations and waste management infrastructure common in developed nations, making them an attractive location to dispose of these materials. Malaysia imported almost 500,000 tons of plastic waste from its ten largest source countries during the first half of 2018, with almost 200,000 tons of plastic waste from the US alone, tripling the amount of waste that was being imported into the country prior to the implementation of the National Sword Policy. This figure does not even account for the tons of waste smuggled into the country. Most of the materials are highly contaminated or are incompatible type of plastic materials for processing, meaning the process is expensive, there is little incentive for proper management, or there are significant risks to human health when it’s incinerated. Instead, both legal and illegal factories have been running quite the lucrative business by improperly processing the material, burning or dumping the materials, thus releasing toxic chemicals like mercury, polychlorinated biphenyls (PCBS), and dioxins into the environment. Not to mention the mental toll it has on communities who are being treated as the world’s dumping grounds. 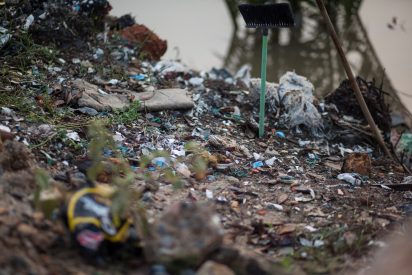 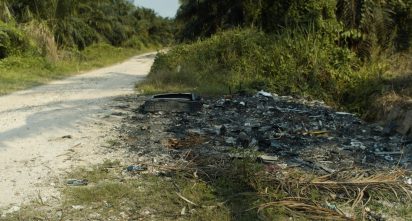 August 22, 2019. Kuala Langat, Malaysia. Photo 1: One of the major ports along the Langat River where plastic materials are smuggled in from overseas. Photo 2: Plastic pellets that have been processed and burnt in a recycling facility are dumped next to a residential house along the Langat River just downstream from Jenjarom. Photo 3: Burning waste is a common waste management method in rural areas throughout Malaysia. Visible is a burnt pile of electronic waste and plastic hidden on a side road in Jenjarom. (Photo Credit: Marlena Skrobe)

Much of this waste production is connected to our growing dependence on plastic materials and our inability to actually recycle them. Since the 1950s, 8.3 billion tons of plastic have been produced globally; however, only 9% of that plastic waste has been recycled. Plastics have been highly problematic for waste management systems around the world, as not all plastics are created equal. While we tout recycling as our green savior to our consumption dependence, the reality is that our favorite waste management method is failing. The truth is, we are terrible recyclers. We’re messy, dirty, and don’t want our garbage in our own backyards. We’ve been placing the burden on China, who has imported a cumulative 45% of global plastic waste since 1992, and now that burden has extended to other developing nations who can’t keep up with our significant waste production. 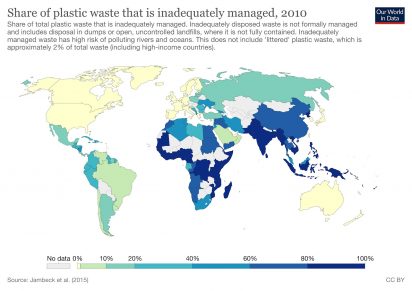 We’ve wasted, we waste, and we will continue to do so. We’ve mastered waste in its entirety, except when it comes to the most critical part of the equation: reducing it. According to the World Bank, we produce approximately 2.01 billion metric tons of municipal solid waste globally per year. By 2050, that number will soar to 3.40 billion metric tons per year. Additionally, the World Bank estimates that 40% of this waste is mismanaged, contributing to climate change while damaging our environment, including our oceans, with approximately 8 million metric tons of plastic entering our oceans annually. Of mismanaged waste, 90% are either dumped or openly burned in low-income countries, which disproportionately harms people from the poorest communities in the world, who are not the ones producing the most waste. If you think putting more effort into cleaning up the waste up after it’s thrown out will be enough, think again. In the US, companies like Exxon Mobil and Shell are investing in a 40% increase in plastic production in the next decade, which will continue to place pressure on humans and their environments. Additionally, when plastic materials break down into microplastics and nanoplastics they are even harder to clean up.

Recycling won’t be able to solve our waste problems. Only a fraction of what we can recycle actually gets recycled and when it does the burden is often placed on poorer communities. Even within the US, communities are disproportionately affected by our waste management services with nearly 80% of incinerators located in marginalized communities. As a society of compulsive consumers, we need to join the KLAA activists in Jenjarom in thinking more critically about the products we decide to purchase and where those products actually end up. Tackling this issue will take a global effort, especially from major producers of plastics, but action can start with our individual choices. When reflecting on US waste in Malaysia, One KLAA member, CK LEE, a local attorney, said, “It’s very disheartening, you bully us because we are poor and because we are weak. Shame on you, USA. I hope the citizens of the USA will think, will consider their behavior, and prove yourself to be morally worthy in our sight. So please, help us, help the world. The only world, the only globe that we share. Because when we pollute in our areas, we are polluting the very same earth that you are living on, that you are living in. So please, help us, and help yourself to protect our only Earth.”