It seems like every week a new company or CEO announces big plans to fight climate change. Only time will tell which plans will lead to impactful action, but in the absence of Federal government legislation, it’s hard to argue against private action. Billionaires and big tech aren’t the only groups calling for sweeping changes, though. University students across the country are pressing their institutions to fight for the planet too!

Without missing a beat, the University of Washington (UW) has also joined the fight and is currently in the process of refining a Sustainability Action Plan, which will daylight spring 2020. UW isn’t just getting in on the trend, though; it moved into the struggle ten years ago when it published its Climate Action Plan (Figure 1) which mapped out a strategy for achieving carbon neutrality by 2050. Among the milestones to hitting that goal is reducing emissions to 15% below 2005 levels by later this year. While we wait for that report, Figure 2, below, gives an idea of the school’s progress as of 2018.

Without question, the most crucial influencer of UW’s green dreams has been student advocacy. Private companies respond to their shareholders (here’s looking at you, Larry Fink), but universities are beholden to their students. While UW had begun thinking about an update to its Climate Action Plan, the process was catalyzed in late 2018 largely due to pressure from students on the Seattle campus. Former UW Sustainability (UWS) Intern, and then-undergraduate student Christoph Strouss suggested that the plan coincide with the 50th Anniversary of Earth Day. UWS took the idea and ran with it! “A grassroots nudge from students can always be effective,” said Strouss, who also authored a sustainability resolution adopted by both the Associated Students of the University of Washington (ASUW) and the Graduate and Professional Student Senate (GPSS).

The 2018 resolution that catalyzed the Sustainability Action Plan called on the university to respond to the IPCC report that “climate change impacts and responses are closely linked to sustainable development which balances social well-being, economic prosperity and environmental protection.” In the resolution, the student governments call not just for a slice of action, but rather a deep-dish plan to decrease costs, increase revenue, and invest in people and infrastructure in order to achieve goals set forth in the university’s strategic plan to sustain, compete, and transform.

As a Research I University, UW’s goals are all designed to be measured. The Sustainability Action Plan is no exception, and is structured to meet the goals of the Sustainability Tracking and Rating System (STARS) framework, a transparent, self-reporting tool for colleges and universities looking to push the envelope in sustainability. STARS rates higher education institutions based on leadership in academics, engagement, operations, planning/administration, and innovation/leadership. UW has achieved the second highest rating (gold) every year it has reported! One of the key pieces of STARS is the transparency of its ratings, which can inspire competition among institutions looking to drive change. Hence, UW’s success is not specific to its own operations, but also helps to inspire change elsewhere.

Success inspiring success may well be the most effective pathway for catalyzing moderate to systemic change as university stakeholders across the country push their institutions toward more sustainable operations.

In early 2020, students at Harvard organized with faculty, staff, and alumni to pressure the ivy league school into divesting its $40 billion endowment from fossil fuel corporations. Harvard faculty subsequently voted 179-20 in favor of breaking ties with fossil fuels. Only time will tell how this decision manifests, but its ripple effects have already inspired action. Institutional Climate Action, a new coalition of publicly funded higher education institutions in Washington State (UW is a founding member), is calling for the same divestment demands as Harvard. ASUW is already drafting a resolution in support of the ICA goals, and if students and other university officials stay involved, the outcome could be monumentous. While traction builds for divestment, university stakeholders can keep the pressure going by engaging with existing initiatives like the Sustainability Action Plan, which is currently in its “Outreach and Refinement” phase.

Students, faculty, and staff have provided input on UW’s sustainability efforts via a tri-campus survey, and through on-campus events at the Samuel E Kelly Ethnic Cultural Center and the Intellectual House, both at UW Seattle. 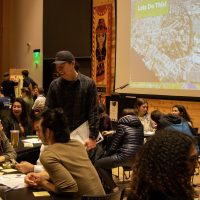 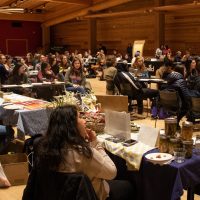 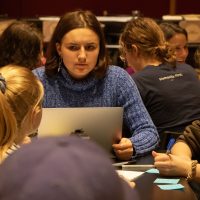 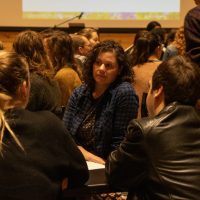 Both ASUW and GPSS have expressed solidarity with their fellow students, and executives from each governing body are currently discussing a joint update to their 2018 resolutions to keep the momentum going. United, students are powerful – universities know that, and lately they have listened. As climate change champions, we would do well to remember that if we want a slice of pizza, we need to ask for the whole pie.

If you’re a student, faculty, or staff at UW Seattle, UW Bothell, or UW Tacoma, ask for your pizza here.

At universities like UW, Penn, and Stanford, that’s exactly what we’re doing.