To many of us, going to the Seattle Aquarium may be a way to fill a rainy afternoon, a chance to get a closer look at a particularly fascinating marine creature, or perhaps an opportunity to learn something new about the aquatic world that surrounds us. But to Jim Wharton, a visit to the Aquarium represents an opportunity to be inspired–inspired to empathize with marine creatures and to take action on their behalf.

Wharton is the Seattle Aquarium’s Director of Conservation Engagement and Learning, so “empathy conservation,” a term coined by researchers out of the University of Michigan, has been on his radar for a while. While originally developed as an alternative to financial incentives and/or regulations to encourage environmentally responsible behaviors, Wharton has applied this concept at the Aquarium in order to inspire visitors to become advocates for marine life and habitats.

As I walk through the Aquarium’s Pier 59 exhibits, I spot many examples of conservation and empathy messaging. In the open-air bird exhibit, signs frame shorebirds as our neighbors that need space and a clean home. During the harbor seal feeding, staffers explain that all the animals are fed with Seafood Watch-approved fish. The omnipresence of conservation messaging throughout the exhibits makes the Aquarium feel more like a conservation center than a marine menagerie of days past. 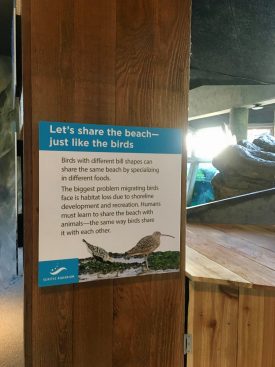 Signs in the Birds and Mammals exhibit prompt us to see wildlife as our neighbors that need sufficient space to live healthy lives, just like us. (Photo credit: Abby Rogerson 11/2/19) 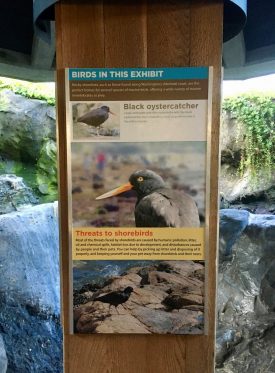 To help mitigate some of the threats shorebirds face (“pollution, litter, oil and chemical spills, habitat loss due to development, and disturbance”), the Aquarium suggests we keep our distance while visiting beaches and to be sure to pick up after ourselves. (Photo credit: Abby Rogerson 11/2/19)

This empathy- and conservation-forward approach will guide the Aquarium as it plans for the Ocean Pavilion, a huge expansion that will revamp the waterfront and showcase the West Pacific’s Coral Triangle. I conducted a Q & A with Wharton to discuss how zoos and aquariums (ZAs) in general have changed in the past few decades, and about how the Aquarium will apply its mission to “inspire conservation of our marine environments” to Ocean Pavilion planning and programming:

Abby Rogerson: Historically, ZAs were places of leisure rather than centers for conservation, public education, and research. However, institutions like Monterey Bay Aquarium and its associated programs have been successful in changing the role of aquariums to the latter. How has the Seattle Aquarium adapted to and embraced this change?

Jim Wharton: ZAs have been in transition for a while. Accredited ZAs haven’t been solely attractions for a long time, making the transition to places of learning and later to conservation organizations. All ZAs accredited by the Association of Zoos and Aquariums (AZA) must have a conservation mission–though this wasn’t always the case. The Aquarium has been accredited for over 25 years, but didn’t embrace conservation until after its transition from a city-owned and city-run facility to a city-owned facility operated by the non-profit Seattle Aquarium Society. These changes, both at the Seattle Aquarium and at ZAs more broadly, have been driven by staff rather than social pressures. What is lagging is the public perception of ZAs as conservation organizations.

In an era of intense public concern over environmental issues, have visitor expectations of the Aquarium evolved, and if so, how?

Yes, for sure. People that come to ZAs now expect conservation information. They want to know how they can help. We did some informal audience research a few years ago in cooperation with The Ocean Project around ocean acidification. One of the ancillary findings was that although visitors were not choosing to visit the Aquarium as a conservation act, once they got here, they expect conservation information and actions, and they are disappointed if they don’t get it. People visit for all kinds of reasons (entertainment, family bonding, sharing their values), but they choose a zoo or an aquarium because animals and the environment are interesting and/or important to them. This makes our visitors a motivated audience for change.

Currently, the Seattle Aquarium features mostly Salish Sea ecosystems. How does expanding its scope to include the Coral Triangle contribute to its mission?

We recognize that many of the challenges facing the health of marine environments are global in scale (e.g. overfishing, plastic pollution, ocean warming and acidification). If we choose to only focus on our own backyard, it may be difficult for our audiences to understand this fact. By helping visitors see and understand that communities on the other side of the world are facing similar challenges, we can create a sense of urgency that has been missing from questions of ocean health.

Are any new conservation programs going to roll out in conjunction with the opening of the Ocean Pavilion? If so, what are they?

Yes! We are heading to Indonesia in November to continue discussions with partners on new conservation programming that will, of course, be featured in the new Ocean Pavilion exhibit. However, our focus is to co-create long-term conservation work in the region with local partners, driven by their needs (not ours). We are fortunate that we have a platform like the Ocean Pavilion to amplify and gain support for this work.

The Seattle Aquarium has recognized its opportunity to spark empathy for marine creatures in its visitors. How does the Aquarium currently incorporate empathy-building in its programs and exhibits, and how will it guide planning for the new Ocean Pavilion?

Building empathy for animals, habitats, and the communities that rely upon them is a core design principle for the new exhibit and an increasing focus of our current work. We have incorporated empathy-building best practices into our education programming (on the beach in our Beach Naturalist program and in our marine science summer camps), we have partnered with an award-winning creative team to create the new children’s book, Catastrophe by the Sea, and we continue to offer workshops to ZAs interested in being more intentional in their own empathy-building practice. To date, we have provided 20 workshops for 48 institutions from 24 states with a combined annual attendance of over 54 million.

This is very much a work in progress. Any work we do here or in the Coral Triangle is guided by our Conservation Priorities: building climate resilient communities, clean waters, and sustainable seas. Individual projects will be developed and co-created with local partners in Indonesia and other communities within the Coral Triangle. We’re in this for the long haul.