During the piercingly cold snow days we just had, I thought a lot about sun, and home. Home for me is the San Francisco Bay Area, where I was first a volunteer and later a research technician in Dr. Kathy Boyer’s wetland ecology lab.

As we walked through a tidal marsh or waded through eelgrass beds, I’d often notice my lab mates saying things like “Oh, this eelgrass looks happy!” or “This pickleweed looks stressed.” Not because I wasn’t thinking similarly, but because in the STEM fields we’re conditioned to Be Objective and resist emotion or anthropomorphization. Yet here were my mentors and co-workers poetically assigning moods to plants, the way Emily Dickinson would capitalize words like Winds, Birds, and Deserts to confer personhood onto them.

By humanizing nature, my lab mates and I were showing respect and reverence for it. This practice was proof of an emotional connection, an empathy and love that motivated us to get up before sunrise to catch the right tide for field work.

Humanization and empathy dictates the way we connect to the world. Studies support the existence of a “racial empathy gap” in which Whites respond less dramatically to seeing a Black person in pain, and even medical staff assume Blacks feel less pain than Whites. Meanwhile, research on climate change action finds that framing the problem in terms of symbols we empathize with, like charismatic megafauna, does a better job of motivating us to act than by discussing threats to things that don’t easily generate empathy.

What happens then if we frame climate change as a threat not to nature but to “Mother Nature,” a being who deserves our empathy and respect?

This is exactly what a growing number of Indigenous peoples are doing. There are huge differences between the anthropomorphization my lab mates and I engaged in and Indigenous practices informed by deep cultural and spiritual ties spanning generations. There is also significant diversity in the way Indigenous communities interact with the land. But there is also a distinct area in the environmental justice movement where Indigenous people have taken the lead:

Evo Morales, Bolivia’s first president to come from its Indigenous population, hosted Indigenous leaders from around the globe at the World People’s Conference on Climate Change in 2010. There, they passed a Universal Declaration of the Rights of Mother Earth. The next year, Bolivia passed a law that granted all of nature equal rights to humans.

In 2017, Māori tribes worked with the New Zealand government to enact the Rights of the Whanganui River, granting a legal personality to the river. In 2018, the White Earth Band of Ojibwe adopted the Rights of Manoomin law to protect their wild rice, the first ever law to recognize the rights of a plant species. This past summer, the Yurok tribe declared personhood rights for the Klamath River.

Other communities have followed the lead of Indigenous activists by advocating for the environment on personhood grounds. Groups in Australia have been calling for the Margaret river to be given legal rights, while two years ago a court decision in India granted the Ganges and Yamuna rivers the same legal rights as people. Last year, voters in Toledo, Ohio passed a Bill of Rights for Lake Erie in response to recurring algal blooms caused by agricultural runoff.

By granting rights to nature, the aim is to confer upon the environment the sort of robust legal protections needed to safeguard it for future generations. As a conservation strategy this represents a shift away from treating nature as property or a set of ecosystem services to regarding it as a legal entity that deserves all the same rights to fair treatment that human beings are afforded.

It’s no accident that many Indigenous people, who know how personhood can be weaponized or stolen, are leading the way in the rights of nature movement. Settlers the world over have deliberately constructed Indigenous people as being less than human, and this dehumanization was foundational to making possible displacement, forced assimilation, and other crimes inflicted on Indigenous communities. If Indigenous people didn’t have personhood, then their exploitation could be more easily justified.

Indigenous people have been resisting efforts to erase their personhood since their first initial contacts with settlers, and this tradition of resistance persists today, from the encampment of Native Hawaiians who are protecting their sacred lands from the construction of a massive telescope, to the activists fighting the chronic undercounting of Native people in the US census, which limits the amount of funding Native communities receive. Locally, Real Rent Duwamish calls on those who live or work in Seattle to stand in solidarity with the Duwamish Tribe by sending them voluntary rent payments in recognition of the fact that the Tribe has yet to be justly compensated for what they’ve ceded to settlers.

By demanding personhood rights for nature, Indigenous activists are therefore not only offering an alternative approach to tackling climate change but challenging settler notions of a dichotomy between human and natural systems. The rights of nature movement is part of a long history of Indigenous peoples asserting their own personhood and rights within societies that doesn’t value the land in the same ways.

Of course, granting rights to the natural world is just the beginning; in order to be effective, these legal rights must be properly crafted and enforced. If nature is a legal person, who is the trustee acting on its behalf? If we aim to protect a piece of nature by declaring it a legal person, how do we also protect the greater ecosystem on which that piece depends?

Also, how do we ensure that legal relationships between Indigenous rights and the rights of nature are codified in a just manner? For example, when Bolivia passed their equal rights law for nature, the Confederation of Indigenous Peoples of Bolivia resisted the move, in large part because a clause granting Indigenous groups decision making powers for megaprojects on their lands was removed.

In Ovens green our Mother bakes,

By Fires of the Sun. 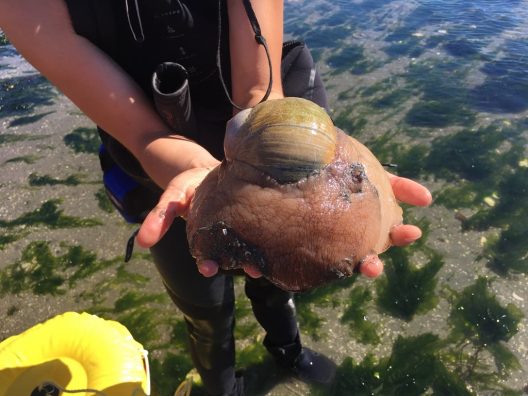 Suquamish Clearwater Casino Resort, July 12, 2018: This moon snail seems pretty happy, but it might be happier once we put it back down. (Photo Credit: James Lee)