The national bird of the United States is the bald eagle, a symbol of freedom and power that can invoke an unparalleled sense of pride in Americans. The bald eagle is a spiritual symbol and charismatic bird, yet it was once almost driven to extinction. Contributors to the bird’s decline included: loss of habitat due to development, illegal fatal shootings from farmers who believed that bald eagles were a threat to livestock, and post-WW2 use of the agricultural pesticide Dichlorodiphenyltrichloroethane (DDT) which contaminated the eagle’s food source and affected the strength of its eggshells.

Researchers estimate that there were once about 100,000 nesting pairs of bald eagles in America. By 1963, there were only 487 nesting pairs of bald eagles left in the wild. Aware of DDT’s effect on the health of the bald eagle, the Environmental Protection Agency (EPA) banned the use of the pesticide in the United States in 1972. One year later, the Endangered Species Act (ESA) was signed into law as a bipartisan piece of legislation signed under the Nixon Administration amidst an environmental movement in the United States that was in response to environmental degradation, air pollution, a rapid loss of biodiversity, amongst other concerns; the bald eagle was immediately listed under the ESA upon its enactment.

Under the ESA, 1,663 animals and plant species are listed as either threatened or endangered. In addition to helping the bald eagle, species such as the grey wolf, manatee, sea otter, and California condor have also recovered under the ESA. However, industry lobbyists and Republican lawmakers have argued that the ESA hurts business and development. In 2018, a group of Republicans in Congress introduced a dozen bills all aimed at amending the ESA to “modernize” the act. Also in 2018, the Trump Administration proposed its own regulatory changes to the ESA, including changes on how future threatened species will be listed and protected, and the approved use of economic assessments when deciding if a species and/or its habitat should be listed.

The Trump Administration’s regulatory revisions to the ESA are being faced with pushback by environmentalists, Democratic state attorney generals, and Democrats in the House and Senate – but the administration insists its changes will better protect species and habitat. Putting political differences aside, it is important to understand what these changes mean for species and habitat in the United States.

How will species already listed on the ESA be affected?

Revisions to the ESA will not affect species currently listed as threatened or endangered.

What about the future listing of species?

The United States Fish and Wildlife Service (FWS) and National Marine Fisheries Service (NMFS) are tasked with identifying at risk species and listing them as endangered or threatened, depending on current threats and population status. Until the Trump Administration’s changes to the ESA, species listed as threatened received the same protections. Protections included a protection of the species and its habitat from a “take”, defined by the FWS as “to harass, harm, pursue, hunt, shoot, wound, kill, trap, capture, or collect or attempt to engage in any such conduct.” Going forward, protections for threatened species, including those considered to be a “take”,  will now be evaluated case-by-case by the regulatory agency, rather than receiving the automatic protections that they once had prior to this version of the ESA. This means that species will only be categorized as threatened and given subsequent protections if the FWS or NMFS decides to issue a special rule under § 4(d) of the ESA.

Under the previous ESA, government officials considered threats against a listed species for the “foreseeable future,” which was considered to encompass current and future impacts from climate change. Under the new ESA amendments, regulators only need to consider threats against a species that are “likely” to occur in the future, significantly decreasing protection from future impacts due to climate change, such as loss of habitat or food sources. The Intergovernmental Science-Policy Platform on Biodiversity and Ecosystem Services (IPBES) has found that impacts from climate change will be the biggest contributor to loss of species in the United States. With this information in mind, we should ask ourselves if is it responsible of the Trump Administration to remove protections for species who are threatened by impacts of climate change from the ESA?

Can we truly assign an economic value to saving a species?

Perhaps the most contestable aspect of this ESA change is the revision that allows regulatory agencies to consider the cost of listing a species as threatened or endangered on the ESA, as well as costs associated with designating habitat as critical for the sake of species recovery. This change is a stark change to the ESA’s previous rule that species listing must only be based on best available science, regardless of associated costs that come with listing a species and/or setting aside critical habitat for its protection. For example, when considering the listing of a bird species and its critical habitat, regulators can incorporate lost revenue from logging practices when considering if the bird should be listed as threatened or endangered and given subsequent protections under the ESA, in addition to scientific data about the species’ current population status and well-being. This change to the ESA also contradicts the Supreme Court’s interpretation of the ESA’s relationship to cost analysis. In 1978, the Supreme Court Case Tennessee Valley Authority v. Hill found that conservation of species was the highest priority of the ESA, and that costs associated with the conservation efforts to be “legally irrelevant”.

If the Trump Administration’s version of the ESA had been in effect at the time the bald eagle was listed on the ESA, it might not have been listed. Consider the new cost analysis consideration. The destruction of the bald eagle’s land was a factor in its rapid population decline. Therefore, to ensure the eagle could recover, its habitat would have to be preserved, meaning potential development opportunities that would have had to be halted. Utilizing the Trump Administration’s cost analysis considerations, regulators would be able to consider the costs associated with protecting the bald eagle’s habitat, and may decide not to list the eagle because costs associated with preserving it would be too high.

However, the protections given to the bald eagles’ recovery have been widely successful; there are now an estimated 69,000 nesting pairs of bald eagles in the United States. In 2007, the bald eagle was removed from the ESA as its population had recovered to what the government deemed an acceptable number. Being that economic development and species recovery are intertwined, the cost considerations for future species listing suggests that the two factors will conflict when regulators consider listing a species whose survival is in question. If the bald eagle needs to be relisted on the ESA in the future, how would the value of saving the bald eagle be approximated when we try to consider its cultural, historical, and symbolic value?

The story of bald eagle recovery is positive, a symbol of the ESA’s potential for species recovery in the United States. However, it should be noted that it took 34 years for the species to be delisted, an illustration of the complexities and time-consuming processes that surround species recovery. 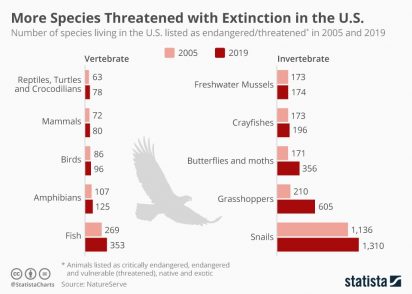 The amendments to the ESA have caused political tensions and raised concerns amongst environmental groups about what changes mean for wildlife and ecosystems in the United States. These changes have come at a time of scientific insights into the impacts of climate change on the world. NatureServe, a nonprofit whose assessments help to inform decisions regarding which animals are considered for protection under the ESA, released a report that found most taxa in the United States had more species added under the ESA from 2005 to 2019. The IPBES released a report in May 2019 that one million plant and animal species are at risk of extinction. This report’s startling findings demonstrates the importance of and need for comprehensive environmental laws and regulations nationally and internationally, as well as the need to understand what exactly what they entail and mean for the future of wildlife in America.