How much time do you spend eating? According to the USDA, the average American spends about 1,800 days of their life eating. With this time eating comes consistent, daily decisions about what to select from our pantry or buy at the grocery store. Additionally, we are inundated with food-related information from physicians, celebrities, and popular health media that complicate our many decisions.

Diet-related messaging ranges from empirically supported to downright bizarre. In the 1830s, Evangelical minister Sylvester Graham linked food with morality and developed the bland “Graham Cracker” that was meant to reduce the sexual urges of Americans. In the 1920s, Lucky Cigarettes advertised their cigarettes as a diet tool, campaigning to “reach for a Lucky when you crave something sweet.” In the 1950s, Dr. Ancel Keys proposed the diet-heart hypothesis, espousing a strong correlation between dietary fat and coronary mortality. This hypothesis then conquered the American medical and diet culture for decades, and the low-fat diet became an American ideology, promoted by health care practitioners, the government, and the food industry. Then in the 1970s, low-carbohydrate diets began to proliferate in the mainstream, starting with the success of The Atkin’s Diet and followed by The Paleo Diet, The South Beach Diet, and The Ketogenic Diet. The USDA’s dietary recommendations fluctuate by the decade. Today we are told to avoid nitrates, sugar replacements, and MSG, while seeking probiotics, fiber, and chia seeds.

However, personal health is not the only dimension consumers consider. The modern environmental movement first began in the 1960s following the Santa Barbara oil spill, Rachel Carson’s book Silent Spring, and the first satellite image of Earth. This trend continued in 1971 when a graduate student named Francis Moore Lappé wrote a best-selling book called Diet for a Small Planet that advocated a meatless diet not for ethical or moral reasons, but because plant-based foods have less impact on the environment than does meat. Today, as the climate change crisis is prominent in the public sphere, we are becoming increasingly aware of how our food choices affect land use, water use, carbon dioxide emissions, and ocean acidification. Many studies show that avoiding meat and dairy is the single biggest way to reduce one’s impact on Earth. More than 80% of farmland is used for livestock, but it produces just 18% of food calories and 37% of protein. Environmental damage is not linked only to meat. Palm oil drives rainforest destruction and massive carbon dioxide emissions, and almonds and pistachios have been vilified for their water-intensive production in water-scarce environments.

Among all this food-related messaging and sense of environmental responsibility, there are many seemingly unrelated aims to consider. However, there might be a solution: a recent, ground-breaking study by researchers from the University of Oxford and the University of Minnesota finds that foods associated with improved adult health often also have low environmental impacts. Links between diet and the environment or health have been shown, but this is the first analysis of individual foods that does not examine health and environmental impacts in isolation. The authors analyze multifaceted food-dependent linkages between five diet-dependent health outcomes in adults—type II diabetes, stroke, coronary heart disease, colorectal cancer, and mortality—and five different environmental impacts of food production—acidification potential, eutrophication potential, greenhouse gas emissions, land use, and scarcity-weighted water use. The study assesses the impacts of 15 different food groups, including chicken, dairy, fish, legumes, nuts, processed red meat, sugar-sweetened beverages (SSBs), and vegetables using 19 meta-analyses that followed millions of people over their lifespans.

For the most part, the researchers find that foods that are healthier are also better for the planet. Dietary changes that could help reach international sustainability goals also reduce the risk of diet-related noncommunicable diseases. Nuts, minimally processed whole grains, fruits, vegetables, legumes, olive oil, and fish are associated significantly with reduced mortality and risk for one or more diseases, while sugar-sweetened beverages, unprocessed red meat, and processed red meat are consistently associated with increased diet risk. Plant-source foods, olive oil, and sugar-sweetened beverages consistently have the lowest environmental impacts for all indicators, while a serving of unprocessed red meat has the highest impact for all five environmental indicators (see recent Currents article). Additionally, foods with a medium environmental impact like refined grain cereals, eggs, dairy, and chicken could improve health and reduce environmental impact if they replaced foods like red meat.

Of course, this environment-diet association is a rule of thumb rather than a universal truth. Sugary beverages, for example, are associated with Type 2 diabetes, stroke, and coronary heart disease, but this study found that their environmental impact is not much more than that of growing vegetables. Conversely, fish consumption is linked to a lower risk of disease but has a larger environmental impact than plants.

Everyday we make multiple decisions about what to eat. Your best friend just began intermittent fasting, your aunt swears by the Whole30, and your favorite celebrity just endorsed a new superfood. Oh, and there is also the planet to save. How do we make sense of this all? Will this study simply sink into the sea of diet-related messaging among physician-backed health claims or environmentally-conscious initiatives? The results of this study may be an oversimplification, as food production is complex and diets must often be individualized due to factors like allergies, access to certain foods, and cultural priorities. However, amidst environmental degradation and a deluge of diet guidelines and marketing, simplicity might be the answer. With global public health and climate change crises, we often search for individual actions that produce meaningful changes. Food is powerful, and the daily decisions we make allow us to wield this power. We should aim to promote a message that is holistic and clear: Eat for yourself and eat for your planet. 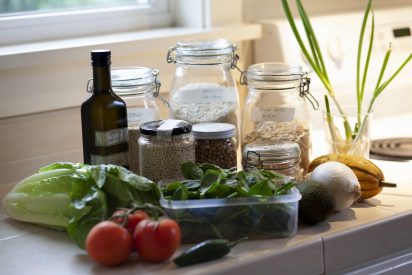 What’s in your pantry? Eating healthy for you and for the planet. “I usually stick to fresh produce, sourced from the Pacific Northwest when I can, and shop at PCC for bulk purchases of grains, olive oil, dried beans, nuts, flour, baking products, and more. There are some pantry and food items that will always come in packaging, but I try to reduce purchasing packaged food items as much as I can. I recognize that I am close to a grocery store that offers this opportunity, but hopefully this will become easier for everyone in the future,” says Creative Art Director, Marlena Skrobe. Photo Illustration: Marlena Skrobe.