As the 50th anniversary of Earth Day approaches, environmental awareness and the need to address the impact of global warming appears to be at an all-time high. Politicians around the world are making references to a “green new deal,” and the world’s most famous teenager isn’t a musician — she’s the 17-year-old climate activist Greta Thunberg, who has been nominated for a Nobel Peace Prize for the second consecutive year.

Yet despite promises by politicians to take action, greenhouse gas emissions hit a record high in 2019, further aggravating the consequences of a rapidly heating planet: deadly extreme weather events, ocean heat waves, and record drought and wildfires. In fact, a new field of study, “attribution science,” has emerged to determine the extent to which global heating is influencing the increasing number of severe events.

Climate lawsuits also are on the rise, with several hundred being litigated worldwide. In December 2019, the Netherlands’ supreme court upheld a ruling that its government had explicit duties to protect its citizens from the impact of climate change. The court ruled greenhouse gas emissions there must be reduced this year by at least 25 percent compared to 1990 levels. The landmark ruling was based on the right to life and well-being under the European Convention on Human Rights.

Elsewhere, the Philippines Commission on Human Rights, responding to a 2016 petition from Greenpeace and other local groups, concluded the world’s biggest fossil fuel firms could be held liable for their contributions to climate change. And The U.N. Human Rights Committee ruled on Jan. 21 that countries cannot force climate migrants to return to their home states.

Climate litigation in the U.S., however, has not fared so well. Two high-profile cases, Juliana v. United States and a New York state lawsuit filed against Exxon Mobil Corp., both suffered defeat recently. The Juliana case began in 2015 when 21 youths sued the Federal government for perpetuating the development of fossil fuels despite knowing greenhouse gas emissions are harmful to their well-being. The youths claimed the government violated their Constitutional rights to life, liberty, and property. But the Ninth Circuit Court of Appeals dismissed the case on January 20, declaring the Judicial Branch is not the proper venue to determine climate policy.

The New York case, dismissed in December 2019 by a state judge, alleged Exxon Mobil engaged in fraud, misleading shareholders about how it factored the risks of climate change regulation into its business operations. In this and the Juliana decisions, the judges indicated the rulings did not dismiss the reality of the climate emergency. The New York Attorney General won’t appeal the decision, but a similar case brought by the state of Massachusetts is proceeding at the state level.

The Juliana dissent: This is what courts are for

Climate litigation in the U.S. falls into three categories, with lawsuits focusing on:

The Juliana case famously centered on the the third bullet: government’s Constitutional responsibility to protect its citizens. However, in the majority opinion dismissing the appeal, Judge Andrew Hurwitz maintained the court lacked the power to enforce a climate mitigation plan or policy decisions — despite acknowledging the record “conclusively establishes that the federal government has long understood the risks of fossil fuel use and increasing carbon dioxide emissions.”

In a searing dissenting opinion, Judge Josephine Staton chided her colleagues for “concluding that this case presents nothing fit for the Judiciary.” Staton cited crucial Supreme Court precedent of school desegregation and prison reform, in which the Judiciary had no choice but to step in when the Executive and Legislative branches failed to address societal ills.

Citing the strength of the children’s case, Staton writes, “According to plaintiffs’ evidence, our nation is crumbling — at our government’s own hand — into a wasteland. In short, the government has directly facilitated an existential crisis to the country’s perpetuity.”

Staton’s dissent reaches back to the words of George Washington, who cautioned, “whatever measures have a tendency to dissolve the Union, or contribute to violate or lessen the Sovereign Authority, ought to be considered as hostile to the Liberty and Independency of America[.]” She went on to write “waiting is not an option” to force policy action because “the bulk of the injury is yet to come.” 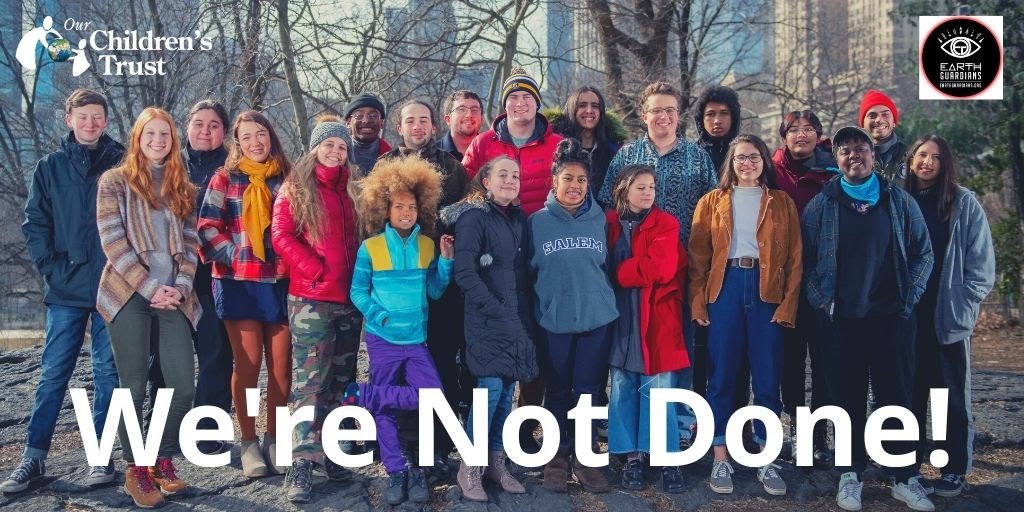 Despite the setback of the 2-1 ruling, the Juliana case is not over. Lawyers have indicated they’ll request an “en banc” session of the Ninth Circuit, in which the case would be heard before 11 judges. The Ninth Circuit comprises the western states and U.S territories and has a total of 29 active judges.

If not the courts, who then?

As Justice Staton concluded in her Juliana dissent, “When the sea levels envelop our coastal cities, fires and droughts haunt our interiors, and storms ravage everything in between, those remaining will ask: Why did so many do so little?” Indeed, as the youths of Juliana argue, why have so many elected officials — to whom we defer decisions to ensure our safety and well-being — failed to enact climate policy to defer future warming?

When our representatives fail us, we look to the judiciary to resolve conflicts and strike down laws that violate our Constitutional rights. Sadly, our right to a healthy planet does not appear to be among them — at least, as far as U.S. courts are concerned, not yet. The majority in Juliana noted the case for climate action “must be made… through the ballot box.” As such, barring future app debacles in the forthcoming primaries and caucuses, we’re in control of our fate.