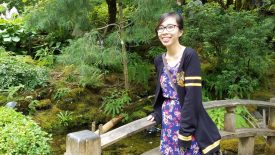 Why did you decide to pursue a Master of Marine Affairs?

Since marine debris entered into my radar when I was 10 years old, this topic has pretty much become what I see as a lifetime objective for me. This led me to pursue an undergrad degree in Environmental Studies from the Program on the Environment (POE), which is also at the UW. I ended up focusing on environmental education then. Upon graduating, I (after failed attempts to work as an environmental educator) decided to work at an early childhood education center. After three years and several existential crises wondering what I’m doing changing diapers rather than working on my “lifetime objective”, I decided I wanted to delve into more of the governance and human dimensions aspects of marine debris. Yes, my “kids” were cute, but I wanted to be in a position to take more proactive measures in addressing marine debris, which I can (hopefully) do with this MMA.

Why did you decide to come to UW’s SMEA for graduate school?

I really enjoyed the classes and interactions I had with my professors in the POE, as well as the interdisciplinary perspectives they brought. When I started my grad school search, I was excited to see that the College of the Environment offered a program that fit exactly with what I was looking for. Since the POE building is right next to SMEA, it’s also nice to be able to swing by and chat with them.

Are you doing a thesis or capstone project? If thesis, what are you writing your thesis about and why? If capstone, what is the project about?

I’ll be writing a thesis about the role of public-private partnerships in governing waste management of marine debris in Miyakojima, Japan. I lived on this island for two years, from the age of 10. After moving to Seattle, I wrote about the island’s culture and environmental challenges for several years on a website I made for a high school web design project. I’ve spent a lot of time thinking about the island in a removed and indirect way. I really wanted to have the opportunity to more directly make a contribution to the island that first alerted me to this issue.

What has been your favorite class at UW so far? Why?

SMEA 512: Interviewing Methods and Environmental Topics with Professor Marc Miller. I’m taking this course right now to help me prepare for my thesis research trip this summer. We read about a wide range of interviewing styles with focuses on various themes. It’s taught in a seminar-esque way, so it’s fun to speak freely about whatever catches our attention and shape the class in a way that fits our personal interests. 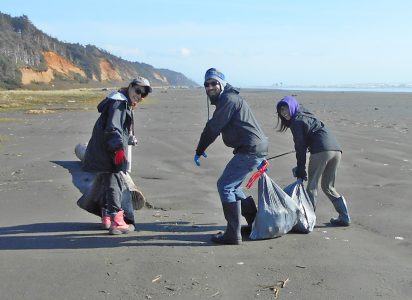 The diverse background of cohorts, or as my fiancé likes to call us, SMEA-gols! I’ve learned a lot from listening to their experiences, perspectives, and about what positions they were in (and still are in some cases) prior to enrolling in SMEA. They are also just a fun and down-to-earth bunch, so I enjoy being in their company.

What’s it like to live in Seattle? What do you do in your spare time?

I’ve lived in Seattle for the past 14 years or so and it’s been my favorite place to live (followed by Honolulu and then Miyakojima). Hiking is always a great idea, although I haven’t really gone much this year, so I need to get on it. I’m also a foodie, big time. Evening Magazine and Yelp are my primary resources for discovering new places to eat, whether I’m craving something sweet, savory, or both.

If you could design your ultimate job after graduating, what would it be and why?

Maybe an extension of my thesis research and apply it to a larger scale. If the concept of public-private partnerships is a feasible and culturally accepted approach for Miyakojima, I would be interested to see if/how the same concept can be applied to other small islands dealing with marine debris.

What is your favorite form of marine life, and why?

Is it wrong to say the species that end up living in or on (mostly plastic) debris? It’s terrible that they’re in such a circumstance to begin with, but at the same time, I find it to be a fascinating and striking image. At one of the beach clean-ups I did at Ocean Shores, WA, I found a lightbulb along the shore that had a group of Amphipoda, which are small crustaceans that look like shrimp. This makes me wonder what their journeys and pathways were.