They Keep Quiet So We Make Noise, the directorial debut of Marlena Skrobe ’20 has been awarded the Audience Award for Best Documentary Short for the 2021 Washington DC Environmental Film Festival. The festival, whose mission is “to advance understanding and stewardship of the environment through the power of film”, is celebrating its 29th year, and is being held virtually due to the ongoing COVID pandemic.

Skrobe came to SMEA with an interest and experience in filmmaking, and continued to develop an interest in plastic pollution and mitigation efforts. This film allowed her to merge her research tools with her

storytelling skills and her commitment to identify, expose, and help solve global environmental injustice perpetuated in global plastic recycling. While studying at SMEA her research interests intersected quite well with Dr. Yoshitaka Ota, Research Assistant Professor and the Director of the Nippon Foundation Ocean Nexus Center. When asked about how the project came to fruition, Skrobe shared: “When I decided to attend SMEA to pursue my Masters in Marine Affairs I had hoped to weave in my filmmaking and journalism background. Through my research assistant position focusing on marine litter and plastic pollution with Yoshitaka Ota, I was able to advance an ongoing project in Malaysia I had been working on for the past few years and develop a new film on the illegal importation of plastic waste in Kuala Langat. I discovered the work of the Environmental Protection Agency of Kuala Langat through various international news articles and with the assistance of the Nippon Foundation, I was able to travel to Malaysia with a cinematographer, Troy Dobbertin, to film They Keep Quiet So We Make Noise.”

In a small Malaysian town outside of Kuala Lumpur, residents woke each night to the overwhelming smell of burning plastic. A few local residents took it upon themselves to form the Environmental Protection Agency of Kuala Langat and uncover the source of the terrible air quality. The group’s work uncovered illicit facilities that were burning and dumping plastic waste as supposed plastic recycling facilities. A press release shares, “In the documentary short They Keep Quiet So We Make Noise, we follow two activists in the Environmental Protection Agency of Kuala Langat, Pua Lay Peng and CK Lee, during a night drive searching for illegal recycling facilities while learning about their fight against the tide of plastic waste being sent to Malaysia from overseas.”

As Skrobe reflects on how her time in SMEA prepared her for this endeavor, she added: “There is a lot of overlap in skills you need as a documentary director and a researcher – from the actual indepth research done before filming, to developing interviews, to considering all the necessary viewpoints in portraying a meaningful and accurate story, to the editing process – selecting the most appropriate and powerful footage to convey information to a viewer. One of the most important skills I learned at SMEA is also one I hold close to my heart as a filmmaker – building relationships and developing trust is the most important part of telling a story. You don’t want to “drop in” and extract information from individuals as a researcher – the same applies to making a film.” 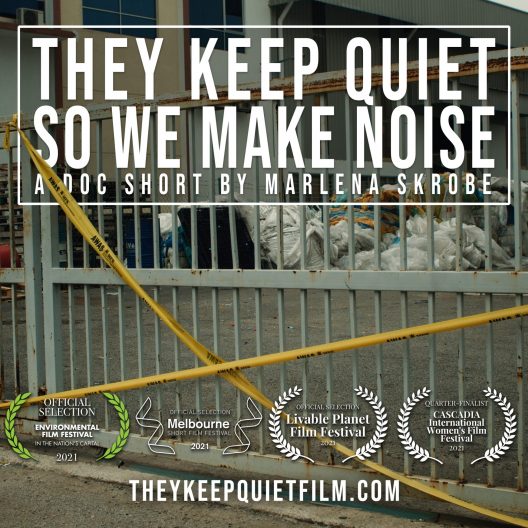 The process of getting the documentary short considered as an entrant to film festivals is a “an incredibly difficult and grueling process” and is costly as well. Despite the effort she’ll put in with her collaborators to share the film across the world, Skrobe commented, “I’ve worked in the film industry for years and have had the pleasure of attending festivals such as Sundance and Tribeca as a crew member (casting & camera) for other films, but to finally attend a festival as a director of my own film means the world to me.”

In terms of what to expect next from Skrobe, she added “My creative partner, Troy Dobbertin, and I are also currently in the process of editing a longer documentary from footage captured during the second leg of our trip in Bangau-Bangau and Semporna, Malaysia. We had the pleasure of spending a few weeks with seven Bajau Laut families in Bangau-Bangau, exploring how plastic is woven into their daily lives. This was my third trip to the area in the past five years so I’ve been able to develop relationships with many of the community members so it’s incredibly important to me to tell their story in a way that honors their trust and friendship. This editing process is a lot more complex since many of the interviews are in Bahasa Bajau (Sinama) and correctly translating the Indigenous language is paramount to their identity. Besides this film, we hope to create more documentaries that investigate how the full life cycle of plastic impacts communities around the world.”

Viewers can stream the short as part of the DCEFF Earth Day Showcase between April 22nd and April 25th.