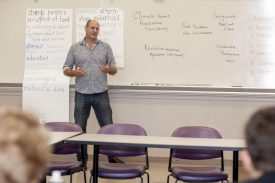 In July, SMEA professor Eddie Allison led a group of designers, urban planners, and landscape architects through a three-day exploration into the role fisheries play in food security and how that role may change in the context of climate change. Organized by the Van Alen Institute, a New York City-based architectural non-profit, the Seattle trip was part of the Van Alen Climate Council’s investigation into “Designing the Future of Food.”

So what do built environment professionals have to do with seafood and climate change? In the self-reflective words of one Council member, “the things that we talk about and design on a daily basis, whether it’s building material, or laying out a transportation system…there’s a result of what we do.” In other words, as this group of designers and others “build things up in the upland, it affects the waters that are so important to [Pacific Northwest fisheries] and the habitats that exist there.”

This reflection on the impact of the built environment was thanks to three days worth of purposeful collaboration and cross-discipline conversation about the intersection of climate change and food security. The group worked backwards from the table to the ocean: connecting first with chefs and fish traders, then to processing and distribution facilities, and ultimately to the seafood growing sites on Hood Canal and the natural fish habitats off the Seattle waterfront.

Commercial fisherman and sustainable seafood consultant, Amy Grondin, co-led the program with Allison, connecting the group to local fish traders and chefs and providing insight into efforts to improve the seafood supply chain in response to changing climate conditions. Allison and Grondin accompanied Council members as they journeyed from Seattle to Hood Canal, grounding their observations in research and connecting them to places and people who hold the stories of the region.

One of those places was the heart of Seattle’s commercial fishing operations at the Port of Seattle, where Allison’s tales of coastal squeeze displacing communities from historically working waterfronts rang true. With the commercial fleet up fishing in Alaska and a rainy summer sky looming overhead, the Port felt quiet and strangely empty. However, Port authorities Delmas Whittaker and Kelli Goodwin told the group it’s that perception of underutilized space that threatens to have development pressures overtake the Port’s critical maritime real estate. Without this critical maritime hub, getting seafood to the tables of Seattleites becomes evermore challenging and costly.

Competition for space in the built environment was nothing new to the Council members, but taking the competition to the water was a first. As the demand for seafood increases and shellfish production expands, new aquaculture operations are popping up offshore, on land, and even in the lab. Visits to the Taylor Shellfish Farms, Hama Hama Oyster Company, and the Long Live the Kings facility felt to one Council member like a trip to Frankenstein’s lab. He speculated, “You can imagine them actually cutting the cord with the natural world entirely and doing this in a giant chemistry set.”

That vision may not be entirely implausible as the shellfish industry turns to innovative solutions to feed future human populations in the face of environmental change, including ocean acidification. Allison hoped this would inspire the Council to redesign and rethink the future of food systems. Ideally, that alternative future would involve producing quality food rather than just what Allison terms “quantity food.” According to Allison, “If your focus turns to nutrition instead of quantity…that maybe starts to lower climate impacts.” This challenge sparked a dialogue about the potential to decentralize food systems and focus on local, culturally-relevant foods.

Culturally-relevant, in the case of Seattle, often means one thing: salmon. The Council was fascinated by their visit to the Seattle waterfront and what Allison deemed ‘salmon-centered design.’ Salmon act as a ‘sustainability integrator,’ bringing together the management of fisheries, marine and freshwater habitats, catchment land-use planning, food systems, nutrition and cultural connection to food and place. The Council considered using the idea of a sustainability integrator to map the interconnectivity of food and climate impacts in a ‘foodscape.’ In this way, consumers could see how iconic local foods could be used as symbols and indicators to advance more sustainable ways of living in cities.

However, solving problems associated with food security and climate change involves multiple systems operating in a complicated web of interactions that left some Council members feeling more baffled than ever. For example, Allison highlighted the contradictory narratives being told about the role of fish in global food and nutrition security. His work, along with that of others, has found that people in general are eating more protein than needed, and the role of fish is perhaps most critical when considering its ability to provide micronutrients essential for healthy development and life.

Despite the complexity of the Puget Sound foodscape, the Council found themselves motivated to continue thinking about how to improve human life in the face of climate change and food insecurity. While the story of seafood in the Puget Sound region is one fraught with climate vulnerabilities, but it is also one of collaborative efforts by passionate and innovative people determined to see the seafood sector thrive far into the future. It remains to be seen where designers such as those who are part of the Van Alen Climate Council can intervene to help ensure that outcome, but that the conversation now involves such a diversity of influential change-makers – including the people who design and build the cities where most of us now live – is surely a source of hope in itself.